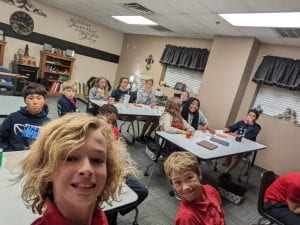 We went to a comp called camp renegade and it was really fun. So, I will be telling what I did there. When we got there we set up where we where going to sleep on the bunk beds, then we went to the skate park but since we didn’t have skate boards we just ran up and down.  We where having a surprisingly a lot of fun, or at least I did. While we where playing lighting and a storm showed up so we had to go incident for like 2 hours. While it was starting to clear up the store was open and I bought a rubber chicken that honked. There where also annoying horns that when you blew on it it made a really annoying noise and that was fun 🤥. After the storm cleared up we where aloud to go to the indoor swimming pool and it was sorda fun if i didn’t have a jammed finger 😐.  Afeter that we went to lunch and the food there was actually good. After that we went on this huge bouncy pillow with volley ball on it but no one played they just bounced. It was also fun when you put your socks on and slid around. After that we went on a “hay” ride with no hay just tractor. After that we went down to the campfire and sang. That camp was pretty fun 7.5/10.